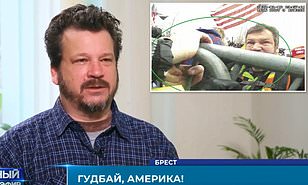 Oyogist has learned that a US capitol rioter, Evan Neumann who was among those declared wanted by the FBI has reportedly absconded to ex Soviet republic of Belarus to seek asylum.

Evan Neumann was seen during the capitol riot in police-worn body cameras shoving a metal barricade at officers.

He also allegedly harassed an officer with punches.

FBI agents had caught up with Neumann in February as he was heading to the San Francisco International Airport.

He had informed the FBI of his decision to travel to Washington DC and return the next day.

Neumann, in recent reports has now come forward, in a sit-down interview with Belarusian state-run television.

He described what he called ‘political prosecution’ in the United States and narrated how he fled to the eastern European country.

During the interview, reporters described him as a ‘simple American whose shops were burned by Black Lives Matter activists’ Neumann, a father of two, is now seeking asylum in Belarus.