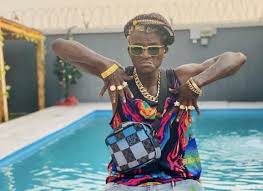 Nigerian hip-hop musician, Habeeb Okikiola, aka Portable, has been interrogated by the Ogun State Police Command for allegedly instigating an assault on his victim identified as one DJ Chicken, Oyogist reports.

The command’s spokesperson, Abimbola Oyeyemi, in a statement on Thursday, June 30, said the singer was questioned after he reported to the police station on Wednesday, June 29.

Recall that Portable was seen in a viral video ordering some youths to be@t up the victim.

“Portable reported at the command’s headquarters in Eleweran on Wednesday about 5 pm with his father and manager. He was immediately ordered to be taken to the public complain bureau office by the commissioner of police, CP Lanre Bankole, where he was interrogated about his role in the assualt melted to the boy in the video.

As A Public Figure, Learn To Keep Your Marriage Private And Secret – Reno Omokri Tells Celebrities

WATCH: Two Men Destroy Their Vehicles After An Altercation On A Busy Road in Lagos