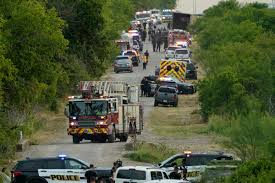 According to reports reaching Oyogist.com, Not less than 40 people have been found dead inside a tractor-trailer in a presumed migrant smuggling attempt in South Texas.

A top US official while announcing the shocking update said 15 others in the truck were taken to hospitals in San Antonio, where the bodies were found on Monday.

It may be the deadliest tragedy among thousands who have died attempting to cross the U.S. border from Mexico in recent decades.

All of the victims were believed to have crossed into the United States illegally, sources gathered.

Officers from the San Antonio Police Department are currently searching for the driver of the vehicle, as at the time of filing this report.