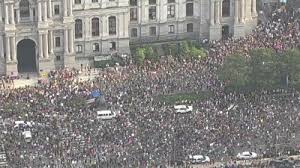 A massive protest was staged on the streets of Philadelphia on Friday night, hours after the U.S. Supreme Court overturned Roe v. Wade giving states the power to ban or otherwise restrict abortions, Oyogist reports.

Also, several Philadelphia pro-choice groups – with the support of city council members – organized the “All Out For Abortion Rights” rally at City Hall that started to ramp-up around 6 p.m. and exploded in size a short time later.

A handful of Protesters appeared to stay peaceful as they chanted and held homemade signs scrawled with pro-choice talking points and quips.

City councilwoman Kendra Brooks scolded the ruling, calling it “the culmination of the Republican fifty-year campaign that began when Roe was first codified in 1973.”

The crowd extended through out several blocks as it marched down Market Street towards Independence Hall and the Liberty Bell.