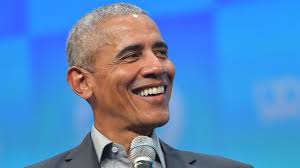 Oyogist has learned that former US president, Barack Obama has urged world leaders to take decisive action in reducing the rate of “dangerous carbon emissions.

“We can’t afford to stay where we are,” Obama told the United Nations Climate Change Conference in Glasgow, Scotland.

Speaking on International cooperation, Obama stated that such step has always been difficult.”

Getting people to work together on a global scale takes time. Right now, that’s time we don’t have. ” The Former President said.