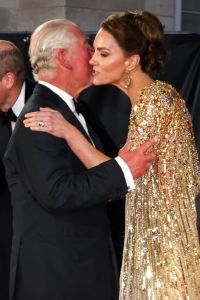 Oyogist has learned that the Duchess of Cambridge, Kate Middleton 39, walked the red carpet at London’s Royal Albert Hall in a Jenny Packham gold cape gown for the premier of no time to die.

Her husband, Prince William, as well as Prince Charles and Camilla, Duchess of Cornwall, were present on the red carpet.
William and Charles also wore elegant black tuxes.

Daniel Craig, also graced the event, as he dressed in a berry-colored velvet jacket.
Co-stars Lashana Lynch, Léa Seydoux, and Ana de Armas, as well as Billie Eilish and her brother Finneas O’Connell, who composed and performed the “No Time to Die” theme song, all dressed up for the star-studded premiere.
Daniel CraigKate MiddletonNo time to die
Share
0
FacebookTwitterPinterestLinkedinRedditWhatsappTelegramViberEmail

“It’s insulting, Hushpuppi and I are not on the same level”- Invictus Obi

Nigerian fashionista gets recognition for designing US inauguration costume