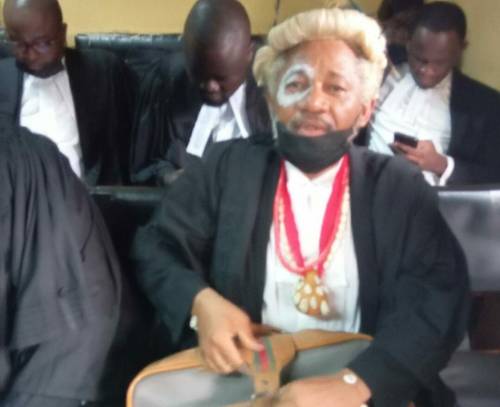 A human rights lawyer and activist, Barrister Malcolm Omirhobo, Monday caused a stir at a Federal High Court in Lagos when he appeared in a combination of court dress and attire said to be worn by adherents of ‘Olokun’, the ruler of all bodies of water and other water deities, Oyogist reports.

The lawyer, who hails from Delta State, last week said he dressed to court in that manner to exercise his fundamental human rights following the judgement of the Supreme Court that allows every Nigerian to express their way of worship and the use of hijab in schools and public places.

In an interview, he described the garb as one usually worn by Olokun worshippers.It was gathered that his colleagues in the Lagos court looked amused as he took his seat to await the day’s proceedings to commence.