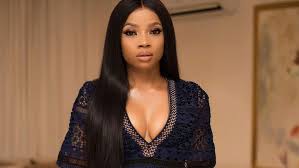 Nigerian media personality and entertainer, Toke Makinwa has showed off the expensive items she acquired for her house help, identified as Miss Dunni Oyogist reports.

In a video shared online, the media personality hailed her maid while she stylishly walked round the house with her new collection(s).

Miss Dunni who was about to embark on a trip back to her village in ondo state bragged that once she arrives, ‘dem go hear am’ ( a popular phrase that shows when someone has made a certain Amount of money/ fame in life).

Recall few days ago, Toke Makinwa had called out many who blame God for their misfortunes in a relationship and claimed that finding oneself in messy hole results from ignoring God’s words.

According to Toke, ‘ God does not punish the offender in a relationship because the wronged partner decided to follow the flesh”.