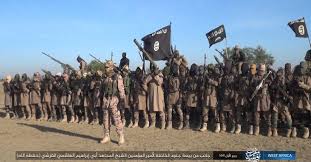 Oyogist has learned that Residents of Babbangida town town in Yobe state, Northeast Nigeria, are currently on their heels, while some took refuge in nearby bushes following an attack on the community by suspected ISWAP insurgents.

The insurgents had returned to attack the town four days after government troops repelled them.

One of the fleeing residents Identified as, Mallam Nura, said “we are still in the bush as I am talking to you now.” Nura said they were impressed by the Nigerian soldiers “who stood their ground and engaged the attacking terrorists as they continued shooting for over two hours. They came in many gun trucks and began to shoot as they entered through the eastern flank. The soldiers stood their ground as they exchanged fire.”

A female source who craved anonymity said, “many of us had to run to Shekau village for refuge.”
InsurgencyISWAP
Share
0
FacebookTwitterPinterestLinkedinRedditWhatsappTelegramViberEmail

BBNaija: “There’s something off and awkward about Whitemoney”- Angel