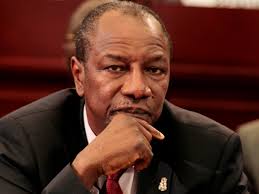 Oyogist has learned that the Guinean Special Forces, reportedly arrested President Alpha Condé, in a bid to claim leadership of a certain National Rally and Development Council (CNRD).

Uncertainty gripped the West African nation amid reports of heavy gunfire around the presidential palace in the capital, Conakry.

An unidentified soldier, draped in the nation’s flag and surrounded by eight other officers, said they planned to form a transitional government.

The defence ministry while reacting to this, Disclosed that the attempted mutiny had been foiled.“

A presidential guard, supported by the loyalist and republican defence and security forces, contained the threat and repelled the group of assailants.

“Security and combing operations are continuing to restore order and peace,” it said in a statement.

Cristiano Ronaldo’s jersey becomes the biggest selling ever in 24hrs