“The calls for removal of service chiefs is unfortunate”- Gen. Enenche 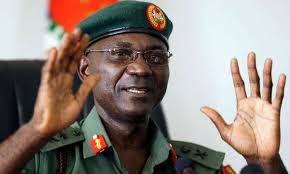 According to report reaching oyogist.com, The Coordinator, Defence Media Operations, Maj. Gen. John Enenche has rubbished the call for the sack of Service Chiefs.

Speaking on Arise Television yesterday evening, the Defence Headquarters spokesman, however, maintained that soldiers’ morale are not in any way dampened by the calls.

Enenche said: “The calls for service chiefs’ removal do not dampen our morale in any way because it is unfortunate that where soldiers are laying down their lives so you can sleep, people are coming out to talk unguarded.

“It is only in this country you can hear that. It is what we have signed for and is a task that must be done.

“At times a man in the war front does not even listen to such talk. How to get the job done is what’s on our mind.”