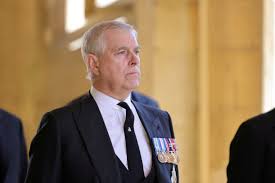 Prince Andrew is to be stripped of his military titles and will cease to be called HRH in any official capacity as he faces a court showdown over sexual abuse allegations, Oyogist.com reports.

On another damaging day for the Queen’s second son, courtiers sought to stem the reputational damage by removing the duke from official royal life while distancing him from the wider family.

The decision to strip him of his military links and royal patronages comes in the wake of a decision by a US judge to allow a civil sexual abuse case involving the duke to move to trial.

Andrew denies all the allegations.Buckingham Palace said the duke would defend his position as a “private citizen” in a statement released on Thursday afternoon.

The palace said: “With the Queen’s approval and agreement, the Duke of York’s military affiliations and royal patronages have been returned to the Queen.

“The Duke of York will continue not to undertake any public duties and is defending this case as a private citizen.”

The duke’s current roles will be handed to other members of the royal family, with the details of the new arrangement yet to be announced.

Virginia Giuffre is suing Andrew in the US for allegedly sexually assaulting her when she was a teenager.

She claims she was trafficked by convicted paedophile Jeffrey Epstein to have sex with Andrew when she was aged 17 and a minor under US law.

Earlier on Thursday, more than 150 veterans from the Royal Navy, RAF and Army signed an open letter calling on the Queen to strip Andrew of his honorary military roles.

Ebonyi Can Never Be Part Of Biafra- Umahi