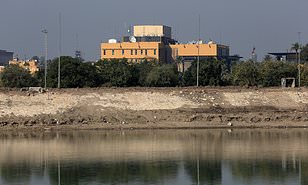 The US embassy’s C-RAM defense system were instantly deployed during the attack, as it destroyed incoming rockets, artillery and mortar shells.

The attack is the latest in a series of rocket and drone attacks that have targeted the American presence in Iraq since the start of the year, following the second anniversary of the U.S. strike that killed Iranian Gen. Qassim Soleimani and Iraqi militia commander Abu Mahdi al-Muhandis.

Pro-Iran Shiite factions in Iraq have vowed revenge for Soleimani’s killing and have conditioned the end of the attacks on the full exit of American troops from the country.

“Even though I am poor, I gave the prisoners money because I have freedom” – Traffic hawker in viral video narrates