Copyright 2021 - All Right Reserved
Home InternationalAmerica Cambodian Prime Minister, Hun Sen Orders All US Weapons in the Country to be Destroyed, Here’s Why
America

Cambodian Prime Minister, Hun Sen Orders All US Weapons in the Country to be Destroyed, Here’s Why 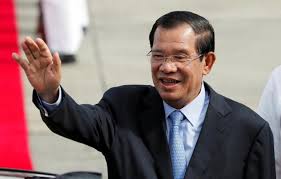 According to reports reaching Oyogist.com, the prime minister of Cambodian, Hun Sen has ordered the country’s military to destroy any US weaponry or dump it in warehouses.

The US had imposed an arms embargo on Cambodia, citing concerns about human rights and corruption in the southeast Asian nation as well as China’s activities there.

But Cambodian Prime Minister Hun Sen degraded the quality of US weapons and equipment, ordering them to be Destroyed.

“Y’all don’t change the Cambodian arms system that was then, go buy the US arms system. In the meantime, I would like to order all armed forces to make an urgent review of weapons and military equipment that Cambodia has and to collect all US military weapons and equipment, if there is, store them in the warehouse or demolish.

Recently, the US armed system users also lost the war in Afghanistan. I believe in the courage, spirit and fighting spirit of the fighters in the battle to protect Cambodia’s territory rather than on a single weapon.

Once again, I thank the USA that helped prove the decision that I do not agree to buy weapons from America is absolutely correct for Cambodia’s national defense politics and it’s a message.