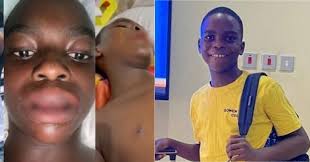 A recent change.org petition which was uploaded few hours ago has emassed over 7000 signatures, Oyogist reports.

The petition seeks to demand justice for late Sylvester Oromoni, who died after being tortured by his fellow rich’ classmates.

It was also alleged that the said classmates were planning to flee the country, a move which has been heavily criticised by several nigerians.

Recall oyogist had earlier shared a video showing the moment Don Davis Mother, Mrs Deborah Okezie slammed the parents of those kids who “tried to cover up their children’s actions.

Also other celebrities took to their official social media pages to deepen calls for justice regarding Sylvester’s death.

Here’s a screenshot of the Petition, which was captured few minutes ago; 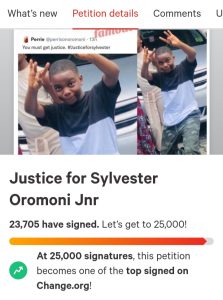