Ex. US President, Donald Trump and son to do boxing commentary for Evander Holyfield vs. Vitor Belfort fight 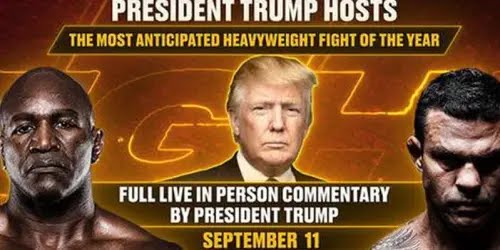 Oyogist has learned that former US President, Donald Trump has signed a contract to stand as a commentator for a boxing match live on Saturday, alongside his son Donald Trump Jr.

The fight, organized by Triller Fight Club, involves Evander Holyfield and Vitor Belfort squaring off in the ring.

The Trumps is set to also provide commentary for three other fights as part of the boxing event.

Trump and his son, Donald Trump Jr., will call a live “gamecast” of a total of four fights in Florida on Saturday, According to multiple sources.

Tonto Dikeh reacts to leaked audio of her allegedly begging ex-boyfriend, Prince Kpokpogri not to leave her