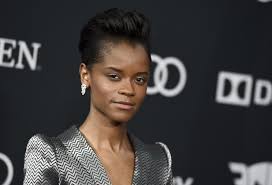 Oyogist has learned that Popular London-based actor, Letitia Wright has hinted on returning back to acting, in a new London-set drama ‘I Am Danielle.

Wright while responding to a question asked by reporters declared to her numerous fans: “The only thing I can tell you is that in 2022 you’re gonna see a lot of me,” she says happily.

“You will probably get annoyed with me because I’m in everything, but, alas, I do this for the craft and because I love you guys.”

Letitia Wright has enjoyed the kind of career that many could only hope for.

She has so far featured in several homegrown TV shows like Top Boy and Black Mirror, for which she earned an Emmy nomination, and the public voted her the winner of the BAFTA Rising Star Award in 2019.

As her tech-loving Marvel princess Shuri, she has appeared in, alongside Black Panther, Avengers: Infinity War and Endgame, which grossed $6billion at the box office combined.