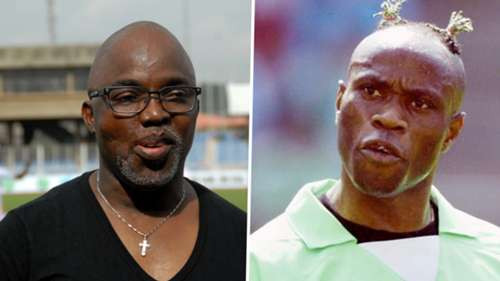 Pinnick had vowed to stop football agents from taking the players to unknown leagues in Europe.

According to him,
“If you’re living in Nigeria, you’re going to a top club. Villarreal, Valencia, Lille, and all those proud footballing clubs and not to one mushroom club that you’re better off,” the Fifa official was quoted per Brila.net.
“I want to expose you people to the highest levels so when you’re going to a foreign club, and we won’t allow any agent take you to countries like Cyprus, Belarus, etc., no, never we won’t allow it and I will make sure no transfer is issued on situations like that.
In reaction to his statement, former Auxerre and Inter Milan defender, Taribo said pinnink cannot keep people against their will in a league that doesn’t respect them, pay them, protect them or care about their welfare.

Such comments from the head of Nigerian football are insensitive and embarrassing.“Instead of improving and focusing on developing the structures around the league, you’re dictating to adults where and how to earn a living.

“His [NPFL] league does not pay footballers and contracts to protect the lives of footballers.”He doesn’t have any power to prevent any footballer who has access to move to those clubs he described as small leagues or ‘mushroom clubs’. Right now, there are no small countries in football.

“We all saw from the ongoing European Championships that the so-called smaller nations are causing upsets against the bigger countries. He said.