CCTV Camera Captures Moment Suspended AGF, Ahmed Idris Mysteriously Got Healed In His Room After Claiming To Be Disabled 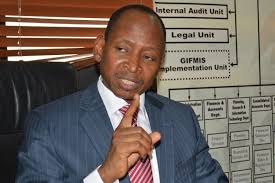 A video showing the moment suspended Accountant-General of the Federation, Ahmed Idris pretended to have a spinal cord injury during court session has surfaced online, Oyogist reports.

From the video obtained by oyogist, the Embattled AGF could be seen walking with a crutches, which made it look as if he was crippled.

However, upon entering his room, Mr Ahmed quickly threw away the crutches which he used for movement, and then knelt down to pray, without noticing the CCTV camera which was placed there.

Recall few days ago, the Economic and Financial Crimes Commission, EFCC, had released suspended Accountant-General of the Federation, Ahmed Idris, on bail.

An EFCC spokesperson, Wilson Uwujaren, who confirmed his release yesterday, said: “The suspended Accountant-General is out on bail. He was released last night (Wednesday).”Idris was nabbed by operatives of the EFCC on May 16, 2022, in connection with a series of frauds that was initially thought to be N84 billion.