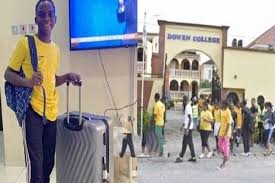 Mr. Sylvester Oromoni has revealed why he did not attending the last sitting of the coroner’s inquest into the controversial death of his 12-year-old son, Sylvester, a student of Dowen College, Lagos, Oyogist.com reports.

The school had claimed that the deceased sustained injuries from playing football.

However, the family said before he gave up the ghost, he revealed that he was brutalised by bullies and a substance was forced down his throat.

In the case which is now before Magistrate Mikhail Kadiri, sitting in Epe, Lagos, Mr. Oromoni was supposed to have appeared before the court as a witness last week but was absent.

Explaining the circumstances to The PUNCH, Mr. Oromoni said he decided not to appear because the other party had failed to file their witness statements on oath.

This will not allow us to be prepared,” he said.The matter is expected to come up on Monday (today) for further hearing.