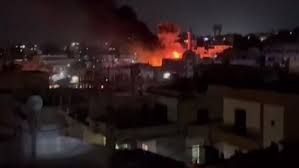 According to reports reaching Oyogist.com, Arms stored for the Palestinian Hamas group have exploded in a refugee camp in southern Lebanon, killing and wounding a number of people.

The exact numbers of the casualties hasn’t been confirmed but that there could be as many as 12 dead in the Burj Shamali camp in the port city of Tyre.

But civil defence workers on the scene said there had been no fatalities. A security source also said fatalities had not been recorded.

Earlier on Friday, camp residents said explosions shook the camp, adding that the nature of the blasts was not immediately clear.

Ambulances rushed to the scene, residents said by phone.

Videos from the scene shared by local media show a number of small bright red flashes above the southern city, followed by a large explosion and the sound of glass breaking.

Initial reports said a fire had started in a diesel tanker and spread to a nearby mosque controlled by the Palestinian militant group Hamas.

The fire triggered explosions of some weapons that appeared to have been stored inside the mosque, according to the residents.

A number of armed Palestinian factions, including Hamas and the Fatah Movement, hold effective control over roughly a dozen Palestinian camps in the country, which Lebanese authorities by custom do not enter.