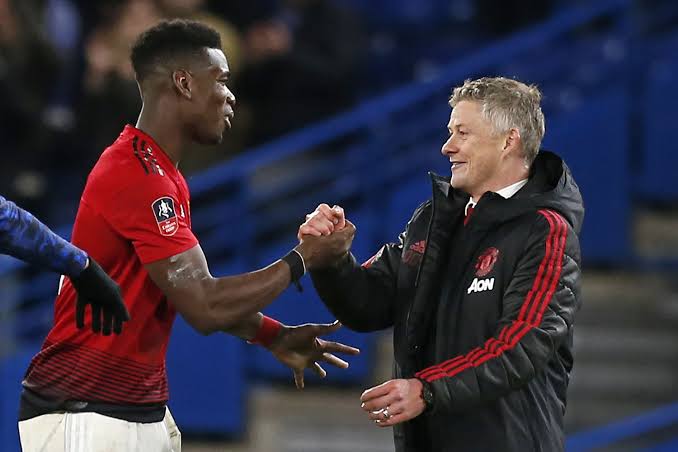 Manchester United midfielder Paul Pogba has described reports of him having ‘snubbed’ Ole Gunnar Solskjaer and ‘shelved contract talks’ with the club following Sunday’s defeat to Liverpool as “fake news”.

On what was a disastrous afternoon from start to finish for United, who were beaten 5-0 and produced one of their worst Premier League performances in history, their woes were compounded when substitute Pogba was sent off on the hour mark for bringing down Naby Keita, who had handed Liverpool the lead 55 minutes earlier.

United, the players and Solskjaer have faced waves of criticism since the full-time whistle blew at Old Trafford on Sunday afternoon from the fans, former players, pundits and the media.

However, midfielder Pogba, who has been left out of the starting line-up in each of United’s last two matches, has now called out The Sun newspaper for publishing a story, in what he has described as being “fake news”.

They had reported that the Frenchman had ‘snubbed’ Solskjaer on Sunday after being left out of the starting line-up and ‘did not speak’ to him after the match. They also claimed that the midfielder had ditched contract talks with the club, with his current deal at Old Trafford poised to draw to a close in less than 12 months’ time.

However, Pogba, taking to social media, has now described the claims as being “fake,” making it clear that those alleged events did not happen. In a Twitter post, Pogba said: “Big lies to make headlines.”

The Frenchman, who started the campaign, just like United, in excellent form, has lost his way in recent weeks and has not started since the 4-2 defeat to Leicester City a little over a week ago, after which he delivered an eye-opening verdict, meaning that could be the reasoning behind his recent omissions from the starting line-up.

The former Juventus man explained: “We’ve had these kinds of games for a long time.