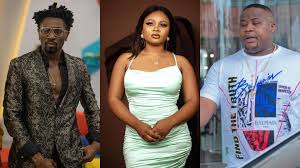 Oyogist has learned that Former

Big Brother Naija, BBNaija, housemate, Boma Akpore, has slammed Socialite, Cubana Chiefpriest over his comments on his adventures with a married woman, Tega in the house.
Recall, Cubana Chiefpreist had taken to his official Instagram page to advise the younger generation to avoid married women asking them not to be heartless like Boma.

“The punishment for sleeping with a married woman knowingly is deep, even King David; God’s most beloved was punished severely by God for doing it. His child died and his wives cheated on him rapidly.

“Dear young world tries to avoid married women. Don’t ever be heartless like Boma,” Chiefpriest had written in the Instagram ppost.

Boma while reacting to Cubana’s post said, ‘people simply want to talk because they can’ claiming it would make more sense to drag him for something he actually did instead of mere assumptions.

”Cubana Chiefpriest made a post accusing me of sleeping with someone’s wife, am like Bro show me the video evidence or is it that you just want to talk without getting your facts right. If you want to call me out, drag me for something I did not what I didn’t do.

Cubana ChiefPriest or what do they call you, get your facts right or get my name off your mouth,” he said.
BBNaijaBomaCubana Chief Priest
Share
0
FacebookTwitterPinterestLinkedinRedditWhatsappTelegramViberEmail