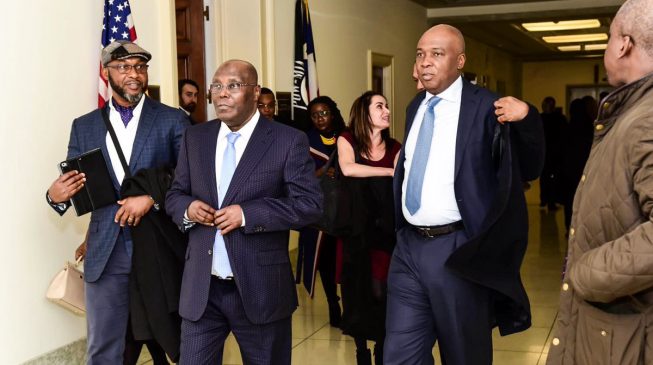 According to reports reaching Oyogist.com, Nigerian opposition leader Atiku Abubakar was alleged to have paid a whopping sum of $16.5 million (N8.7 billion in today’s parallel conversions) to an American firm to help him destroy Pres. Buhari’s campaign message and procure a visa to Washington in the run-up to the 2019 presidential vote.

Atiku Abubakar had used the money to enlist the services of K.M. Family Investment, LLC, a Texas-based public affairs consultancy run by Sada Cumber, a Pakistani-American diplomat and former U.S. Special Envoy to the Organisation of the Islamic Conference (OIC) under former President George W. Bush.

The deal was reportedly facilitated by Legacy Logistics, an Abuja-based integrated services venture owned by a certain Mr Samuel Cornelius and Joseph Nzepuome.

Amongst other campaign ideas, Mr Cumber and his team decided to accept the $16.5 million deal to help Atiku lobby American politicians and bureaucrats for a visitor’s visa, and also help build a structure tasked with the “destruction” of opposition messaging, Oyogist learned further.