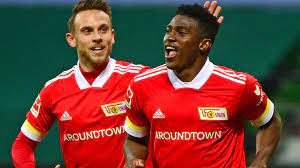 Ex-Liverpool striker Taiwo Awoniyi chalked up his fifth goal in all competitions this season with a superb finish Sunday as Union Berlin earned a 2-1 home win over Borussia Moenchengladbach.

The 24-year-old has now scored in each of Union’s three Bundesliga games and forged a partnership alongside Germany striker Max Kruse.

Awoniyi’s transfer from Merseyside was made permanent this summer after spending last season on spell at Union, where he managed a total of five goals.

The Nigerian rounded Gladbach’s Swiss goalkeeper Yann Sommer and tucked his shot into the net from a tight angle just before the break.

The visitors scored a late consolation goal when Jonas Hofmann tapped the rebound in the net after a shot by substitute Laszlo Benes was saved.

Union are eighth after their first win in three league games.

“We can’t compete with other clubs like PSG, Manchester City, and Man United”- Barcelona Manager

BBNaija: “I’ll miss everyone if I get evicted”- Maria