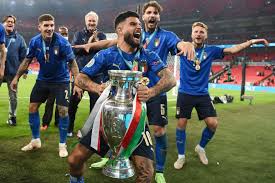 italy are now the official Euro Champions after defeating England 3-2 on Penalties.

nglish player, Luke Shaw scored in the 2nd minute of the first half to give England the lead against Italy in the Euro 2020 Final at Wembley.

Italy goalkeeper Gianluigi Donnarumma was the hero for the Azzurri in the shootout, while substitutes Marcus Rashford, Jadon Sancho and Bukayo Saka failed to convert from the spot for England.
Italy vs EnglandUEFA EURO 2020
Share
0
FacebookTwitterPinterestLinkedinRedditWhatsappTelegramViberEmail