VP Osinbajo urges Nigerian youths to involve themselves in Politics 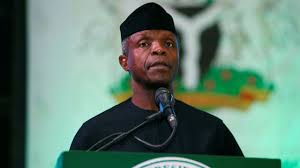 Oyogist has learned that the Vice President Yemi Osinbajo, SAN has urged Nigerian Youths to involve themselves in Politics.

The clergyman made this known during the Progressive Youth Conference organised by APC Youth wing at the International Conference Centre, in Abuja.

“Nigerian youths will play even more critical roles in shaping the country’s political and economic future by becoming more active in politics and encouraging platforms for more constructive engagements on national issues, while driving conversations that will enhance national unity.”

He further stated, “it is evident just from voter-turnout alone that the vast majority of young people either do not register to vote or do not vote. Those who even participate at all would rather engage within the very constrained space of social media platforms or join pressure groups. Neither of these is necessarily bad, but while media engagements and pressure groups may draw attention to the issues, they do not transform the lives of millions for good or ill. So, if you are keen on how the future will turn out, you must be involved in politics.”

“Growing up, I was also in a number of pressure groups, concerned with corruption, human rights and democracy. I wrote papers and argued at conferences but it was only in 1999 when the AD won elections in Lagos that I was able to serve as Attorney General, and working with several colleagues, we carried out a major reform of the justice sector in Lagos State. We had to participate politically, otherwise all our great ideas may never be tried.”
nigeriaVice presidentyemi osinbajoyouths
Share
0
FacebookTwitterPinterestLinkedinRedditWhatsappTelegramViberEmail