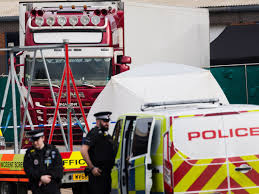 Oyogist has learned that the Italian police has confirmed the arrest of a suspect wanted by Britain in connection with the death of 39 Vietnamese migrants.

The suspect, Identified as Stefan Damian Dragos was Accused of providing the lorry truck that transported the migrants to England.

Dragos, reportedly, “belongs to a criminal organisation dedicated to illegal immigration”, the Police statement added.
The 39 Vietnamese migrants were all found dead in the container procured by Drago, as they Reportedly died due to suffocation in the container.
italyMigrantsVietnamworld
Share
0
FacebookTwitterPinterestLinkedinRedditWhatsappTelegramViberEmail