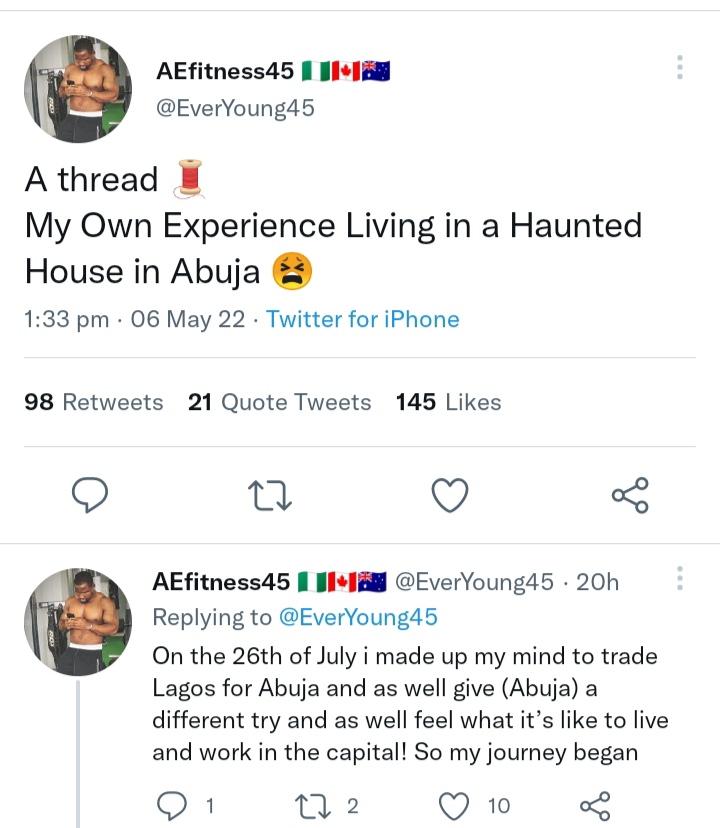 A fitness guru has narrated his horrific experience after he decided to relocate to Abuja in search of a high paying job, Oyogist reports.

According to the man identified as @EverYoung45 on twitter, he relocated to the house after several months, and was fully exited for the journey ahead.

However, things began to change when he noticed some strange happenings in the compound.

According to him, he became seriously ill the first day he moved into the house, after he had made payment to the landlord.

“Fast forward to 2 months in the compound , you would hear strange wind sound , hear footsteps , when it is past 11pm at night I will hear the sound of a stone dropping on the floor usually in the bathroom area or in front of my bed frame. It was crazy .

“On the 11th of April , a very mighty wind blow across the compound and it yank off my roof but then , my apartment was in the middle between 2 other apartments but the wind could only lay damage to my roof(the apartment roof remains intact).

“I Complain bitterly to my landlord but the man no send me . I have change the security bulbs more than 5times since i moved in there and it never occur to me that i was literally living with ghost!

“My kitchen was a small kiosk constructed outside since they didn’t make plans for kitchen to be included in the main building . Once it gets dark the compound gives this chilly vibes like you’re in a forest disconnected from the world completely.

“On the September 1st during the last bbn show during one of their Saturday night party , at about 12:04am the worst of the worst happened to me and it’s an experience i don’t wish on my worst enemy.

“At around the aforementioned time , i legit over head 2 babies(guess in their infant stage) crying profusely beside my window, my only neighbor had traveled , at first was thinking maybe it came from the tv, had to turn the volume of the music box.

“The crying lasted for about 20 mins , so how did i know they were 2 different babies? So they crying was simultaneous , A will cry and stop B will take over like that interchangeably. Omo that was the first time I was that scared in my life, he wrote further.

In conclusion, the young man urged people to involve God whenever in search of a house.

” Always ask questions from people the compound , the information will always come handy, he wrote.

IPOB not a proscribed organization in UK, says British High Commission in Nigeria