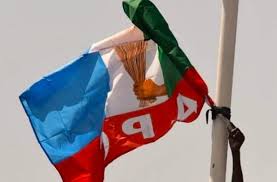 A copy of the receipt currently being issued to APC Presidential Aspirants who purchased the party’s nomination form has surfaced online, Oyogist reports.

A Twitter user, @chinyere who shared the receipt on her page disclosed that the receipts are currently being handwritten, making it look fake.

Her post read;”APC can’t have computerized receipts? It has to be handwritten? N100 million o. This receipt looks so cheap. C’mmon.

Meanwhile, Chukwuemeka Nwajiuba, Minister of State for Education, has purchased the ruling All Progressives Congress (APC’s) nomination and declaration of interest forms for the 2023 presidential election.

According to reports, Nwajiuba obtained both forms after a group, Project Nigeria, reportedly pooled the N100m fees.

The indigene of Imo State, Nwajiuba was appointed minister of education by President Muhammadu Buhari in August 2019.