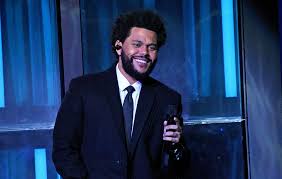 The singer took to social media to announce the news of his forthcoming release.

“New album : dawn FM // january 7th,” he captioned the post with a cryptic video teaser alongside snippets of new music.

Billed as “A new sonic universe from the mind of The Weeknd,” Dawn FM will feature collaborations in some form with Quincy Jones, Tyler, the Creator, Lil Wayne, Oneohtrix Point Never and actor Jim Carrey. Further details about the guests were not provided.

The moody minute-long trailer begins with what appears to be The Weeknd crashing an automobile and being carried away by mysterious hooded figures.

Shortly after, viewers saw a much older version of the singer looking around in confusion, followed by a stunning image of a blue light shooting out from his head. The clip closes with a radio DJ announcing, “You are now listening to 103.5: Dawn FM. You’ve been in the dark for way too long, it’s time to walk into the light and accept your fate with open arms.”

Watch Trailer For The Weekend ‘Dawn FM’ Below;