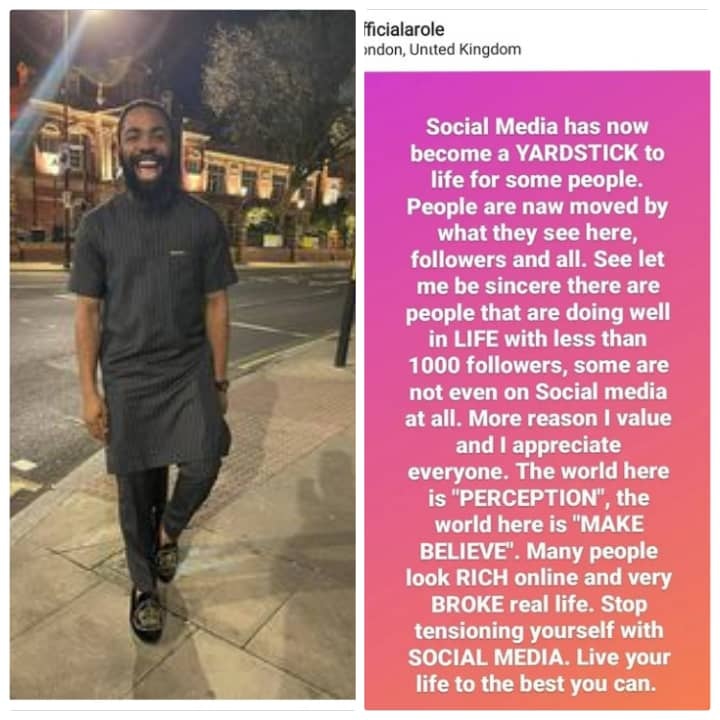 Oyogist has learned that Popular nigerian Comedian and prophet, Woli Arole has taken to his social media page to lament over how people use social media to measure lifestyle.

The comedian insisted that there are a lot of people who have less followers on social media or aren’t on social media, who are doing well outside in real life.

He averred that this makes him appreciate everyone.

He opined that the world of social media is intoxicated with “Perception” and “Make believe”, as Many people act rich online but are financially unstable in real Life.

The comedian warned his followers against tensioning themselves on social media and advised them to live life to the fullest.

“Social Media has now become a YARDSTICK to life for some people. People are now moved by what they see here, followers and all. See let me be sincere there are people that are doing well in LIFE with less than 1000 followers, some are not even on Social media at all. More reason I value and I appreciate everyone, he wrote.

The world here is “PERCEPTION”, the world here is “MAKE BELIEVE”. Many people look RICH online and very BROKE real life. Stop tensioning yourself with SOCIAL MEDIA. Live your life to the best you can”. The comedian stated.