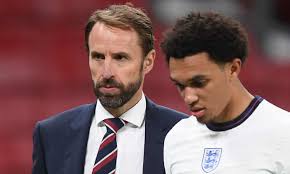 Oyogist has learned that England manager, Gareth Southgate has expressed shock over Liverpool’s manager, Jürgen Klopp claim on the use of England Players.

Last month, Klopp questioned Joe Gomez’s omission from Southgate’s team, pointing out that John Stones’ lack of top-flight experience this season had not prevented him from being chosen.

“Obviously there’s a special thing for Mr Stones,” Klopp said, while he was also critical of Trent Alexander-Arnold’s use in midfield against Andorra in September.

“Why would you make the best right-back in the world a midfielder? I don’t understand that really,” he said.

“I don’t quite know why he keeps having a swing, you’d have to ask him,” Southgate said regarding kloop.

“I think we’ve always got on reasonably well. I’ve noticed quite a few articles and quite a few comments, which is always interesting to see.”