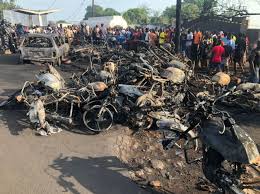 The explosion happened shortly after a fuel tanker collided with another vehicle near a gas station in the city’s eastern suburb of Wellington, causing a large spill, city officials said.

Residents in the area had gathered with plastic containers to collect spilled gasoline, according to rescue workers and city authorities.

By Saturday afternoon, 99 bodies had been recovered from the scene and taken to the state morgue in the port city of the West African nation.

It was gathered that many people were trapped in their cars and were unable to escape when the tanker exploded.

I have trust issues –Adesua Etomi