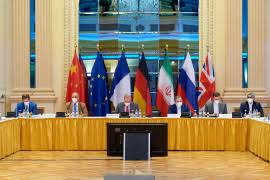 help
Divert
another crisis looming over the prospect of restoring Iran’s 2015 nuclear deal.
According to Rafael Grossi, director general of the International Atomic Energy Agency (IAEA), the meeting was “constructive” and both sides agreed to continue discussions on the sidelines of the agency’s general conference in Vienna later this month.
They also agreed that Grossi would travel to Tehran again soon to replace the agency’s monitoring cameras’ memory cards, which will still be kept in Iran in line with a law passed by the hardline Iranian parliament in December.
Nuclear crisis
Share
0
FacebookTwitterPinterestLinkedinRedditWhatsappTelegramViberEmail