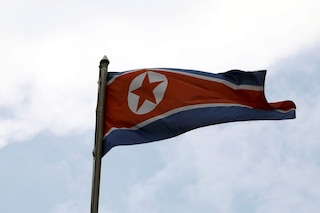 Oyogist has learned that South Korea’s Joint Chiefs of Staff has confirmed that two short-range ballistic missiles (SRBMs) travelled about 430 km (267 miles) to a maximum altitude of 36 km (22 miles) after being launched eastward on the northwest coast of North Korea.

Although KCNA news agency didn’t really specify the missiles’ range, or trajectory, it Disclosed that a firing drill was held in North Pyongan Province to “check and judge the proficiency in the action procedures of the railway-borne regiment.”

The country tested the rail-based system for the first time last September, saying it was designed as a potential counter-strike to any threatening forces.Since New Year’s Day, North Korea has launched three ballistic missiles in an unusually fast sequence of weapons tests.

The previous two launches involved what state media called “hypersonic missiles” capable of high speeds and manoeuvring after launch.Hours before the latest test drill, North Korea slammed the United States for pursuing new sanctions in response to its recent missile launches, calling it a “provocation” and warning of a strong reaction.

North Korea has defended the missile tests as its sovereign right to self-defence and accused the United States of intentionally escalating the situation with new sanctions.

North Korean leader Kim Jong Un did not attend the drill. KCNA said the military leadership had ordered the test “at short notice” and the system precisely struck the target set in the east coast with “two tactical guided missiles.”

The system “demonstrated high manoeuvrability and rate of hits,” KCNA said, adding its success led to discussions to “set up proper railway-borne missile operating system across the country.”

Over the years, North Korea has been steadily developing its weapons systems, raising the stakes for stalled talks aimed at dismantling its nuclear and ballistic missile arsenals in return for U.S. sanctions relief.