Copyright 2021 - All Right Reserved
Home Celebrities “I’m a moving train, I’ll crush you” – Peruzzi reacts after being called out for walking out on his fans
Celebrities

“I’m a moving train, I’ll crush you” – Peruzzi reacts after being called out for walking out on his fans 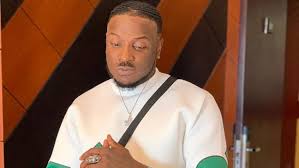 Oyogist has learned that Nigerian singer, Tobechukwu Okoh stage name, Peruzzi, has reacted to allegations of him walking out on his fans on social media.

According to reports, Peruzzi was called out by fans after he allegedly arrived at 4 a.m at a club in Oshogbo which was considered extremely late.

He was then requested to apologize to fans but the singer, however, walked out on his fans angrily which has sparked outrage.

Reacting to the allegation, the singer took made an Instagram Live video, saying that he is unbothered and nothing can stop him from going after those that come for him.

, “I’m a moving train, if you stand in front of me, I’ll crush you. I don’t play; you better go ask around before messing with me.”
celebritiesPeruzzitrending
Share
0
FacebookTwitterPinterestLinkedinRedditWhatsappTelegramViberEmail