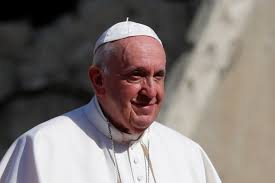 Oyogist has learned that Pope Francis has made his first public appearance Earlier today after a major surgery operation on July 4, the first time that Francis has faced a significant health concern during his eight-year of service.

While giving his Sunday sermon, the pope looked well, speaking in a relatively clear voice although not as strong as before his hospitalisation.

He urged south Africans to halt the ongoing rioting in the country and embrace peace.

“Let us put a halt to the frantic running around dictated by our agendas. Let us learn how to take a break, to turn off the mobile phone,”