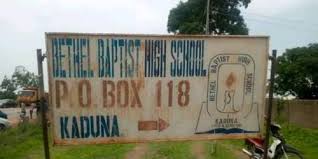 The Southern Kaduna Baptist union Conference (SKBC) has urged the Federal government to speed up the process of finding the hideouts of the 121 students of Bethel Baptist High School, Damishi, Kaduna, who were abducted on June 5.

President of the Conference, Rev. Donald Arak, made the call in a statement issued in Kafanchan, Kaduna State, on Saturday.

Gunmen had invaded the school, taking away scores of students, further demanding bags of rice, beans, vegetable oil and salt among other foodstuffs from the school to keep feeding their victims, Oyogist reports.

“How on earth will you forcefully take away such a number of minors without considering the psychological injury you will be inflicting on them.

“This goes to show how ungodly and heartless the kidnappers are.“And why haven’t these people been tracked? What is the reason for the NIN-SIM card registration?

“Imagine the bandits requesting for a specific number of food items and even bargaining. This is a systematically organised crime.

“We, therefore, demand that these students be released without any further delay and in perfect condition of health,’’ he stated.