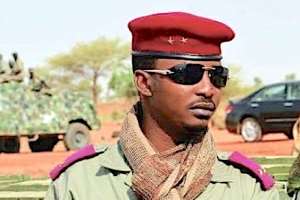 Oyogist.com has learned that barely Less than 24 hours after the death of the President of Chad, Idriss Déby, his son, General Mahamat Kaka has been announced the interim head of State.

He is expected to resume operations and oversee the administration until a substantive president is elected.

Army spokesman, General Azem announced the latest development in a statement read out on the national television.

“General Mahamat Kaka, the son of the deceased Chadian leader, has been named interim head of the state,”