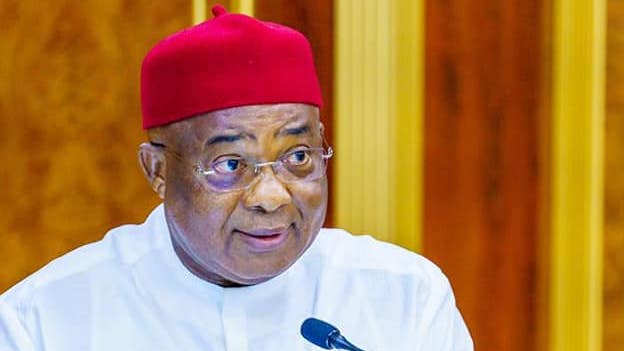 Oyogist has learned that Imo State Governor, Hope Uzodinma has given Gunmen operating in Imo state a 10-day ultimatum to lay down their arms.

The Governor who asked the gunmen to leave the forests in the state and surrender themselves and their arms to the traditional rulers for unconditional pardon, further revealed that the state would be hosting the annual Army Day Celebration from June 30 to July 6.

According to Uzodinma, no fewer than 10,000 military personnel drawn from the Army, Navy, Air Force and the Police, among others would be in attendance.

He also revealed that the president who is expected to declare open the Army Day celebration had also fixed July 12 and 13 as the period he would commission the Owerri-Orlu and Owerri-Okigwe roads as well as perform the flag-off of the construction of Owerri-Mbaise-Umuahia (from Fire Service) and the Orlu-Akokwa roads and the foundation laying ceremony of the Imo International Conference Centre in Owerri.

Uzodinma also said the state would take delivery of military equipment that would be used to clear the remnants of gunmen hiding in various bushes in the state.

He said; “The state is more determined now than before to clear all bandits and to achieve this, the expected equipment and additional recruitment of more Ebube-Agu personnel working in collaboration with the security agencies in the state will be used to clear all the waterways and ride the state of gunmen including crude-oil theft.

“All the waterways are under surveillance with the delivery of new Naval Equipment to the Naval Base in Oguta.”