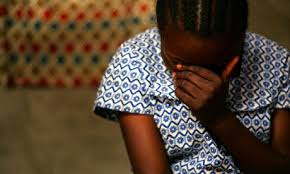 Nigerians are currently demanding justice for a little girl identified as Chidinma after her aggrieved aunty beat her to a pulp in Warri, Delta state Oyogist reports.

The little girl had caught the attention of passers-by when they noticed she was bleeding and crying profusely.

It was gathered that her yet-to-be identified aunt caught her sleeping on a chair in her shop at Okere Market Road, Warri, Delta State, and landed a heavy blow on her nose.

Eyewitnesses quickly poured water on the victim’s bleeding nose as they berated the suspect and called for her arrest.

One of the eyewitnesses narrated what transpired as another called the suspect unprintable names and promised to ensure she gets arrested as she would be closely monitored.