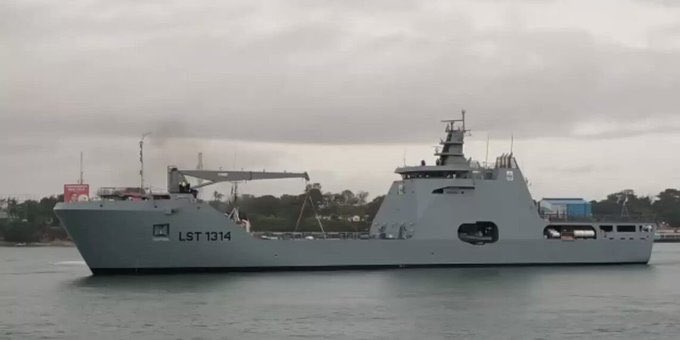 The NNS KADA is Nigeria’s first Landing Ship Tank – LST 100 since the last one from the 80s was decommissioned over a decade ago.

Our correspondent gathered that the ship was ordered from Damen Group in 2019 and built at Albwardy Damen shipyard in Sharjah, the United Arab Emirates (UAE).

The vessel departed for Nigeria on 1 April and prior to its arrival in Lagos, made stopovers in five countries: Angola (Luanda), Gabon (Port Gentil), Kenya (Mombasa), Oman (Port of Duqm), and South Africa (Cape Town).

How Does The Nigerian Navy Ship LST 100 Operate?

The ship which was designed based on illustrations from Damen’s LST 100 will be used for a range of duties including strategic transport of equipment and troops, humanitarian assistance and disaster relief operations, and to project maritime security into the Gulf of Guinea.

Oyogist learned that the NNS KADA features a dwt of 1,300 and an an overall length of 100 m.

The LST can carry a crew complement of 32 plus 16 embarked marine forces (EMF) in the deckhouse, with accommodation for an additional 234 EMF at mid-ship below the main deck.