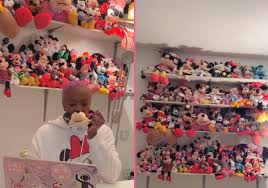 Cuppy, in the video gaining massive grounds online shared numerous collections of Minnie Mouse, which she said she has collected for over ten years.

Posting the video via her social media timeline, Cuppy wrote: “MOST people don’t know this, but been I’ve a Mini Mouse collector for OVER 10 years! I have over 100 dolls including special edition collectors pieces @DisneyAfrica.” See the post HERE

Meanwhile, Several Nigerians while reacting disclosed that cuppy’s childish nature is the reason why she hasn’t found any suitor yet.

Dis one don pass Daddy girl, Bobrisky says as he reveals his father calls him a lot