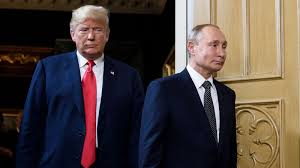 Oyogist has learned that Former US President, Donald Trump has said the US should not be involved in the Ukraine-Russian crisis.

Trump Futher described it as an ‘European problem’.

Trump’s statement comes shortly after Russian President Vladimir Putin agreed to hold talks with Germany, France and Ukraine while Joe Biden said he would deploy troops to the area ‘in the near term’ without backing from NATO.

Speaking with conservative radio host Glenn Beck on Saturday, Trump said the US should keep out of Europe but doubted Germany could help broker a peace agreement due to its gas dependence with Russia through the Nord Stream 2 pipeline deal.

‘They’re getting their energy from Russia, so Russia has total control over Germany,’ Trump said.

‘And Germany’s saying, ‘Oh, we don’t want to fight them.’ They can’t fight them.

Being a father, best moment of my life – BBNaija Tobi Bakre