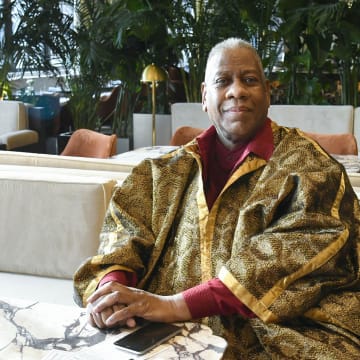 Andrê Leon Talley, the former longtime creative director for Vogue and a fashion icon in his own right, has died at age 73, on Monday, 18th January, 2021 in New York, Oyogist.com reports.

The news of his death was announced via his official Instagram page on Wednesday morning.

“It is with great sadness we announce the passing of André Leon Talley on January 18, 2022 in New York,” the post read in part.

Talley was the only Black man to serve as creative director at Vogue and authored several books, including a 2020 memoir, “The Chiffon Trenches.”

Raised by his maternal grandmother in the Jim Crowe South, Talley first rose to prominence in New York City in the 1970s before he went to Paris, where he worked for Women’s Wear Daily.

He then worked at Vogue, first as a fashion news director in the early to mid-1980s and then as creative director until 1995.

He briefly left but eventually returned in 1998 as the editor-at-large until his departure in 2013.Talley also served as a judge on “America’s Next Top Model” from March 2010 to December 2011.

Additionally, he was the subject of the 2017 documentary film, The Gospel According to André.“I don’t live for fashion; I live for beauty and style,” he said in the opening scene. “Fashion is fleeting, style remains.”