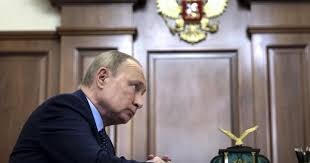 Oyogist has learned that the Russian Foreign Minister, Sergey Lavrov has dismissed U.S. claim of its alleged plan to invade Ukraine.

Recall oyogist had reported that the White House said Friday that U.S. intelligence officials had recently observed that Russia had already deployed operatives to rebel-controlled eastern Ukraine to carry out acts of sabotage there and blame them on Ukraine in a “false-flag operation”

.A delegation of U.S. senators had visited Ukraine to emphasize U.S. support for the country.

“Our bipartisan congressional delegation sends a clear message to the global community: the United States stands in unwavering support of our Ukrainian partners to defend their sovereignty and in the face of persistent Russian aggression,” Sen. Jeanne Shaheen, a New Hampshire Democrat, said in a statement.