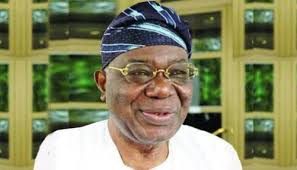 Oyogist has learned that the vice president of Nigeria, Yemi Osinbajo recently uploaded a video showing the moment flags in the presidential villa were set to fly at half mast following the death of Chief Ernest Shonekan.

The Vice President had paid a condolence visit to the family of the late Shonekan on Sunday in Ikoyi, Lagos.

“Here was a man who made impact; he was one of the first leaders in the private sector to begin to shape economic policy in Nigeria,” Osinbajo said.