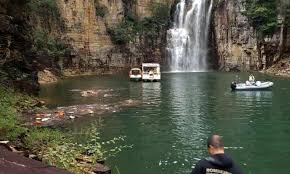 According to reports reaching oyogist.com, a towering slab of rock broke from a cliff , and toppled on to pleasure boaters drifting near a waterfall on a Brazilian lake earlier today.

Local authorities disclosed that at least five people were confirmed dead shortly after the huge rock fell into the lake, and several others are still missing.

Video images which surfaced online showed the moment small boats gathered slowly near the sheer cliff on FURNAS Lake when a fissure appeared in the rock and a huge piece fell directly on two of the moving boats.