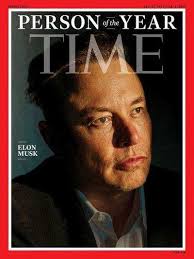 Oyogist.com has learned that founder and CEO of SpaceX and Tesla CEO, Elon Musk, has been named as Time Magazine’s Person of the Year 2021 on Monday, December 13.

Musk, 50, made history this year after his space company, SpaceX completed the first all-civilian crew mission into space.

He also overtook Jeff Bezos as the world’s richest man.

‘The richest man in the world does not own a house and has recently been selling off his fortune. He tosses satellites into orbit and harnesses the sun; he drives a car he created that uses no gas and barely needs a driver,’ Time wrote.